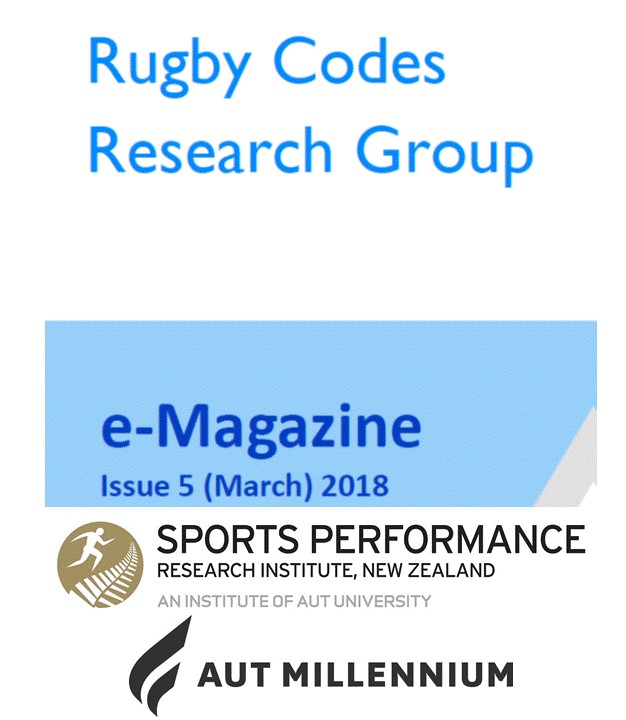 Released March 1, 2018 - 12:00PM -- Dr. Lopez and his collaborating team at the Rugby Research and Injury Prevention Group, Hospital for Special Surgery, are honored to be affiliated with this multi-disciplined professionals team, making the Rugby Codes Research Group (RCRG), of Sports Performance Research Institute New Zealand, Auckland University of Technology (SPRINZ/AUT). The aim for the RCRG e-Magazine is to communicate advances in evidence-based knowledge and its practical application to the wider support network of rugby codes. In this issue we provide an update of rugby codes research projects by members. The mission of the RCRG is to make holistic advancement of practice within the rugby codes via applied research. Their aims are to bring together expertise that integrates areas of sport research (injury prevention, strength & conditioning, sport technology, coaching, psychology, physiology, performance analysis, leadership, management). As well as, to offer leading edge design and development solutions to rugby organizations, teams and players around the world.

Conducted Dec. 12, 2017 - 3:00PM. Released Feb 13, 2018-12:00PM -- Dr Lopez is fortunate to be interviewed on the eve of winning down under from the ASICS Sports Medicine Australia (SMA) Conference -the BEST NEW INVESTIGATOR IN SPORTS INJURY PREVENTION, with his work on U.S. Rugby-7s. As the sport grows in North America, stakeholders are still challenged with the expansion of the sport globally.  Trying to understand the true injury burden in the sport in the U.S. will be injury preventive.  Do emerging markets have the same injury rates as established rugby Nations?  Dr Victor Lopez Jr., Executive Director of the Rugby Research and Injury Prevention Group & Director of Medical Services, Northeast Rugby Olympic Development Academy, while down at the Rugby Barbados World 7s with his Elite Women’s Squad, discusses with Rugby 7s Magazine Editor, Mr. Dustin Rosen, his opinions on the importance of his award and injury surveillance on US Rugby by levels of play, to aid in the injury prevention model for translation of player welfare. He thanks all the teams, players and administrators/tournament directors who have helped him and tirelessly promote the sport for the love of it!

Two Awards on Two-Formats of Rugby in Two Hemispheres!

Sep. 11, 2017 - 2:20 - With the NFL still grappling with the long-term impact of concussions, some American football programs are turning to lessons from rugby to help prevent injuries. Could rugby-style tackling be the key to making the sport safer? What Safety Lessons can Football Learn from Rugby? Dr Victor Lopez Jr, Executive Director of the Rugby Research and Injury Prevention Group, and Mr Kent Oszmanski, Performance Rep, Rhino Rugby USA, discuss with Fox Producers, Mr Sean Conlon & Mr Gabe Nazario, their opinions on the potential impact of the rugby tackle to have injury preventive measures, due to rugby's lack of use of external safety gear.

Dr Victor Lopez Jr, Dr Richard Ma et al have the honor and privilege to present their work at the International Olympic Committee World Conference on Prevention and Injury & Illness in Sport, March 16-17, 2017, in the Principality of Monaco. These abstracts presented, have been published in the British Medical Journal, British Journal of Sports Medicine, the foremost medical journal on rugby studies.

Lopez et al have presented consecutively for three years in a row at the American College of Sports Medicine (ACSM), Annual Meeting, etc.

Lopez et al, have been honored to presented consecutively for three years in a row at the American College of Sports Medicine (ACSM), Annual Meeting, World Congress on Exercise is Medicine, and World Congress on the Basic Science of Exercise and the Brain. To present nationally their grassroots work on U.S. Rugby-7s and RISERugby Study, in the beautiful cities of San Diego, Boston and Denver, USA.

An Interview with Dr Lopez on player welfare in a developmental academy and sports injury prevention research.

At the Rugby Barbados World 7s International Tournament there was an interview with Director of Medical Services, of the Northeast Academy, a USA Rugby National Development Program and as the Executive Director of the Rugby Research and Injury Prevention Group, Inc., Dr Victor Lopez Jr, DO

Dr. Victor Lopez Jr, Executive Director of the Rugby Research and Injury Prevention Group, NY, NY, was the first interviewed by Orthopedics Today, on the sport of rugby in the U.S. He discussed the groups efforts in their community based "RISEStudy," an injury surveillance program that was created in 2009, and employed across major events in the U.S. on Rugby-7s. Orthopedics Today, is the only clinical newspaper for orthopedic professionals. This publication reports on clinical advances in musculoskeletal care and socioeconomic news related to the broad practice of orthopedics. It is published by Slack, Inc., Thorofare, NJ 8086.

Dr Victor Lopez, Jr, et al., were honored to be the first to present on the sport of rugby, let alone the new Olympic format of Rugby-7s, at the 2014 American Orthopedic Society of Sports Medicine (AOSSM) Annual Meeting, July 10th, in Seattle, WA. The Final Program (pg 24), describes his abstract which has also been published in the 2014 Orthopedic Journal of Sports Medicine.

Dr. Victor Lopez, Jr, Executive Director of the Rugby Research and Injury Prevention Group, has been honored to podium present the first grassroots study & efforts in the U.S., the RISERugby Study started in 2009. This was presented at the 2014 USA Rugby Medical Symposium Annual Meeting (with a National focus), January 3, 2014, in Las Vegas, Nevada. He described the injury rates found at multiple levels and among elite vs non-elite populations as well as the potential for injury prevention in U.S. Rugby-7s and its impact globally.