The Baker Athletics Complex at Columbia University in New York City has been selected as the venue for the 2018 USA Rugby Emirates Airline Club 7s National Championship, to be held August 11-12.

Located in the Inwood neighborhood of Manhattan, the Baker Athletics Complex features both the 3,500-seat Rocco B. Commisso Soccer Stadium and the 17,00-seat Robert K. Kraft Field at Lawrence A. Wien Stadium. Rocco B. Commisso Soccer Stadium will be the primary venue for the Club 7s championship event, and is located next to the Campbell Sports Center, named for Columbia University and Old Blue of New York icon, Bill Campbell.

The 2018 Emirates Airline Club 7s event will feature 32 teams from across the United States, competing in one of the newest Olympic sports for the right to put their name on the Emil Signes Cup. Both the men’s and women’s divisions annually share the spotlight in equal access to all portions of the event – including equal time in front of the many passionate rugby fans occupying the main field.

“New York is an incredibly exciting location to host Club 7s,” noted USA Rugby Club Department Manager Erik Geib. “Old Blue, the Empire GU, and the many clubs in the region are thrilled to see this event return to the East Coast, and USA Rugby is confident that all of our local partners are going to do an excellent job in helping put on a world-class event.”

The Baker Athletics Complex is the current home of Columbia University athletics and is also the primary venue for Old Blue of New York, one of the U.S.’s most prominent and successful rugby clubs. Old Blue has appeared in twelve national championship finals in XVs and 7s, and won both the 1993 and 2005 Men’s Club 7s National Championships. The club’s men’s 7s team has appeared in 15 Club 7s championship events overall (tied for 7th-most all-time), including the last six consecutive championship events, and its women’s program was the National Runner-Up in both 2014 and 2016.

“Returning Nationals to a location east of the Appalachians for the first time in 16 years is huge,” noted Performance Game Board 7s Working Group Chair. “The density of clubs nearby who will benefit from this location includes over a quarter of the final participants, and Columbia is a terrific facility.”

“It doesn’t get bigger than New York,” added Geib. “We believe that the Baker Athletics Complex is going to be a venue the teams and fans fall in love with. For those that can’t attend in person, we’re also elated that FloRugby will be producing the event for fans across the world.”

First played in 1985, the Club 7s National Championship event is the preeminent domestic Rugby Sevens event in the United States. Rugby Sevens made its Olympic debut at the Rio 2016 Olympic Summer Games, and the majority of Team USA members honed their craft playing Club 7s. Past Club 7s championships have featured players such as 2017 World Rugby Men’s Sevens Player of the Year Perry Baker and 2016 Team USA Women’s captain Kelly Griffin, who was the 2011 Club 7s MVP.

Ticketing information for this year’s Club 7s championship will be available soon. Fans who can’t make it to New York may watch the event live on FloRugby. Further information about the 2018 USA Rugby Emirates Airline Club 7s National Championships is available at USAClub7s.com. 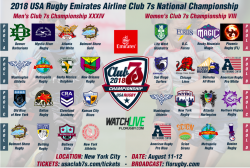 In the men’s competition, there are plenty of familiar faces. Between the sixteen teams, there are over 120 combined appearances; and with the exception of Cleveland Academy is in its debut season, each team has made the national championship tournament before. Three contenders on the men’s side will be the traditional powerhouses: Belmont Shore Rugby, Old Blue of New York and the Denver Barbarians. Belmont Shore has won three national championships, Old Blue two and the Barbarians have finished second eight times. After winning the top seed in the highly competitive Frontier Region and winning the Division II Men’s National Championship in fifteens, the Barbarians will like their chances to claim a first 7s title. however, they’ll face stiff opposition. Another team looking for their first 7s national title, is Dallas Rugby. Dallas has been in fine form this year securing both the number one seed from Red River and the Eastern Open Championship. They could be one of the favorites to lift silverware come the end of the weekend.

For the Women, there may not be as many familiar faces with four of the sixteen teams making their nationals debut. Granted, there is still an excess of quality rugby taking the pitch at Baker Complex. Included in the women’s tournament are four of the top six teams from last year, and a combined six national championships. Those six national championships belong to the San Diego Surfers (last year’s runners-up), Scion Sirens (fourth last year) American Rugby Pro (sixth last year) and Berkeley All Blues. Outside past champions, New York Rugby Club and Life West Gladiatrix are both coming out of impressive seasons. Each will be primed to take home their first 7s national championship.

If you’re unable to make it to out to New York, you will be able to soak in all the action via www.florugby.com

*Note: Belmont Shore Rugby split their rosters before the season started and played qualifiers as if they were separate clubs.

*Note: American Rugby Pro split their rosters before the season started and played qualifiers as if they were separate clubs.